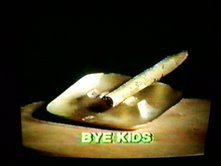 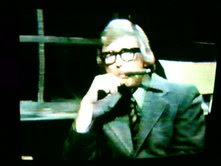 It was 30 years ago on this date when the KTVU Crew dismantled the CREATURE FEATURES set in preparation for JOHN STANLEY's arrival the next day!

Posted by Bob Wilkins: The Man Behind The Cigar at 7:39 PM No comments: 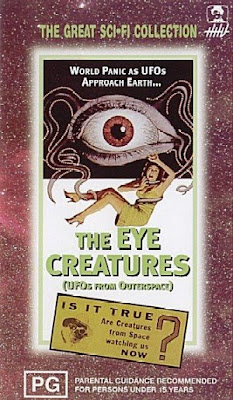 On this evening, Bob shows THE EYE CREATURES for the second time (Last Time Shown OCTOBER 28, 1967). This is a LARRY BUCHANAN TV Remake of AIP's classic THE INVASION OF THE SAUCERMEN. THE EYE CREATURE is absolutely awful, even worst than ATTACK OF THE MUSHROOM PEOPLE. Note that the poster to the left is a Video Cover for the VHS release and they ripped off the poster for THE CRAWLING EYE which I think is better than THE EYE CREATURES.
Posted by Bob Wilkins: The Man Behind The Cigar at 11:46 PM No comments: 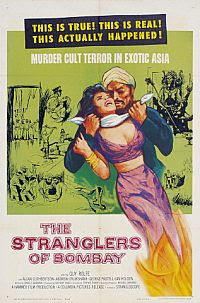 On this evening, BOB WILKINS shows THE STRANGLERS OF BOMBAY for the second time (First Time Was On APRIL 8, 1967). Bob also shows an episode of SECRET AGENT.
Posted by Bob Wilkins: The Man Behind The Cigar at 12:02 PM No comments:

28 Years Ago On This Date, BOB WILKINS Signed Off For The Final Time At KTXL TV 40. On his show, There a a skit about KTXL Executives Cancelling Bob's Show because of the ratings. The real reason of course because of Bob spending more time with his family as well as operating his own Advertising Agency in the Bay Area. After the skit, Bob announces that this indeed his his last show on KTXL. He had left KTVU a couple years earlier. Bob had Former BIG TIME WRESTLING announcer, HANK RENNER as a guest as well as his Wife SALLY and Two Children, ROBBY and NANCY BETH. To my knowlege, This was there only appearance on Bob's Show on KTXL. (Bob's Children appeared on both KTVU's CREATURE FEATURES and CAPTAIN COSMIC shows.)

They also showed clips of Bob's Past Shows (KCRA with HARRY MARTIN, KTVU's CREATURE FEATURES and CAPTAIN COSMIC opens), but funny thing though, they never did show any clips of Bob's Old KTXL Shows? There was also Video Taped Tributes by his friends, HARRY MARTIN, GARY TOMSIC and DANA REEMS. Bob's Last KTXL Show is available on Video as well as on YOU TUBE:

Posted by Bob Wilkins: The Man Behind The Cigar at 8:33 PM No comments:

Today Is FRIDAY THE 13TH! 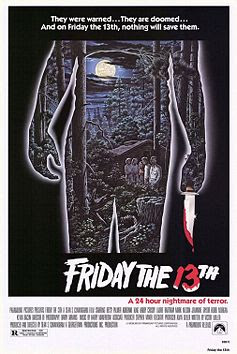 Today is Friday The 13TH of February and today, NEW LINE CINEMA and PARAMOUNT PICTURES jointly releases the remake of 1980's FRIDAY THE 13TH. I'll probably not see it as I dread remakes. As for the Friday The 13TH movies, They are a mix bag. A few I like, a few I hate and a few that I can take it or leave it. There are a few that I didn't like when I first saw it but they kind of mellowed over the years. Here is my list of Favorites and Least Favorites of all the Friday The 13Th films except for the New Remake.

1.) FRIDAY THE 13TH(1980) The original of course is the best of the series. And despite popular belief, JASON was not the killer but his mother. I loved TOM SAVINI's Special Makeup Effects! And the Uncut Version was recently released on DVD.

2.) FRIDAY THE 13TH THE FINAL CHAPTER (1984) Despite its title, it was not the last in the series. Tom Savini returns to create an awesome JASON VOORHEES.

3.) FRIDAY THE 13TH PART 3 IN 3D (1982) I loved the 3D Effects and RICHARD BROOKER plays Jason and does a good job. PARAMOUNT recently released it on DVD in 3D!

4.) FRIDAY THE 13TH PART 5 A NEW BEGINNING (1985) Surprisingly this was my least favorite of the Friday The 13TH film, but it just grew with me. No Jason, but neither did the original. This was more of a Who Done It like the original and I liked the ending!

5.) FRIDAY THE 13TH PART 6 JASON LIVES (1986) Not bad. Some humor and Jason is revived as a Zombie. I still preferred JOHN SHEPARD as an Adult TOMMY JARVIS from Part 5 compared to THOM MATTHEWS, though I liked Thom in the RETURN OF THE LIVING DEAD movies.

6.) FRIDAY THE 13TH PART 2 (1981) Another one which I didn't care for in the beginning but has mellowed over the years. I like that Burlap Sack Jason. Reminds me of THE ELEPHANT MAN.

Not Bad But Not Good!

1.) FRIDAY THE 13TH PART 7 THE NEW BLOOD (1988) The only plus in this movie is the VERY AWESOME LOOKING JASON VOORHEES played by KANE HODDER who played him a record 4 Times! And the looks of this Jason is great, rates up there with Tom Savini's creations of the Original and The Final Chapter.

3.) JASON GOES TO HELL THE FINAL FRIDAY (1993) The first NEW LINE CINEMA Jason. And you don't see Jason that much. This is more of a Supernatural Friday The 13TH Film.

2.) FRIDAY THE 13TH PART 8 JASON TAKES MANHATTAN (1989) For years, I thiught this was the worst until I saw JASON X. Boy was I wrong, but this is still a stinker!

Posted by Bob Wilkins: The Man Behind The Cigar at 9:24 PM 1 comment: 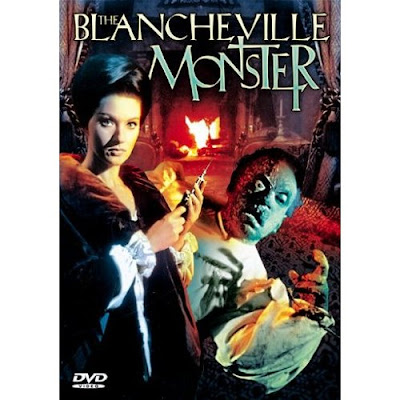 Well at Midnight, BOB WILKINS shows the Low Budget movie, THE BLANCHEVILLE MONSTER (1963), which is available on DVD from ALPHA VIDEO and was known simply as HORROR in Italy. Bob also shows an episode of SECRET AGENT.
Posted by Bob Wilkins: The Man Behind The Cigar at 6:28 PM No comments: 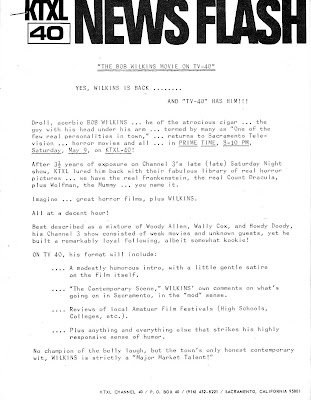 I want to thank TOM WRYSCH for this Press Release that was in Bob's Personal Files. It clears up a mystery myself and many fans of BOB WILKINS have wanted to know. The Exact Date Of Bob's First Day on KTXL TV 40! Click On Image To Enlarge.
Posted by Bob Wilkins: The Man Behind The Cigar at 10:41 PM 1 comment: 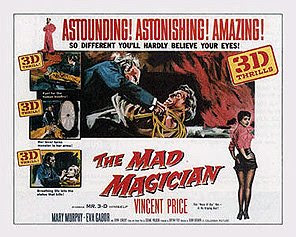 On this evening, BOB WILKINS showed a 1954 VINCENT PRICE classic from COLUMBIA PICTURES: THE MAD MAGICIAN. Originally shown in 3D when first released (as well as when shown on TV in the 1980's), it was shown in 2D. Bob also showed an episode of SECRET AGENT.
Posted by Bob Wilkins: The Man Behind The Cigar at 8:19 PM No comments: