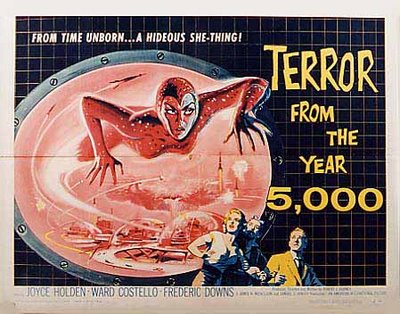 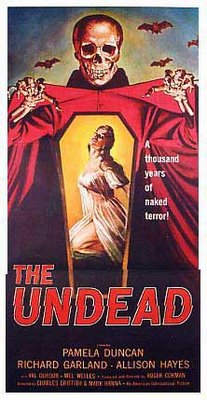 On Saturday Night, January 28 on KCRA Channel 3 at 11:45PM, Bob Wilkins showed the double feature of "The Undead" (1957) and "Terror In The Year 5000" (1958). The first feature: "Two psychial researchers procure the services of a prostitute and sends her back in time under hypnosis. She finds herself in the body of a past existence-a woman in medieval times waiting to be beheaded as a witch by avoiding this fate, she unwittingly starts to alter history." The second feature: "Professor Ehrling and his financial backer build a prototype time machine to snap objects. Latest find, a statuette radiometrically dates to 5200 A.D.
Posted by Bob Wilkins: The Man Behind The Cigar at 9:20 PM No comments: 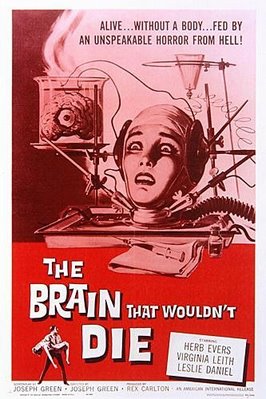 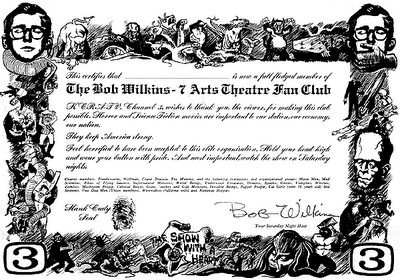 On Saturday Night, January 21 at 11:15PM on KCRA Channel 3, Bob Wilkins showed a double feature that would later entertain a generation of "Mystery Science Theatre 3000" fans. They are "The Giant Gila Monster" (1959) and "The Brain That Wouldn't Die" (1962). The first movie: "A small Texas town finds itself under attack from a hungry 50 Foot Gila Monster". A favorite at the drive ins, usually part of a double feature with "The Killer Shrews" (Also shown on Bob Wilkins show on December 3, 1966). The second feature: "After a car crash, a scientist keeps his wife's head alive in his laboratory. As if this weren't enough, an evil beast ponds and screams from a locked room adjacent to the lab." An excellent movie. The best looking version is available on DVD from "Synapse Films". Most others are dupey looking. Highly avoid the both the old Warner VHS as well as a later MGM Midnite Movies VHS version of this film as both are sourced from a censored TV print. Probably the same print, Bob Wilkins showed on this fateful night.
Posted by Bob Wilkins: The Man Behind The Cigar at 7:43 PM No comments:

On Saturday Night, January 14 in 1967 on KCRA Channel 3 at 11:35 PM, Bob Wilkins only showed one movie this time, an interesting AIP movie directed by Mr. BIG himself, "Bert I. Gordon":"Attack Of The Puppet People" (1958) stars John Hoyt and John Agar and is about: "Deranged Dollmaker, Mr. Franz is deathly afraid of being left alone so he creates a machine that can shrink humans down to only a few inches". Kind of like a low budget version of "Dr. Cyclops" (1940).
Posted by Bob Wilkins: The Man Behind The Cigar at 4:17 PM No comments:

Beginning a brand new year, 1967 brings out better movies for Bob Wilkins to show. Actually just the same, maybe marginally better. On Saturday Night, January 7 on KCRA Channel 3 at 11:15PM, Bob Wilkins showed the double feature of "Voodoo Woman"(1957) and "Viking Women and the Sea Monster" (also 1957). The first feature "Deep in the jungles, A Mad Scientist is using the natives voodoo for his experiments to create an indestructible being to serve his will." The second feature: "A group of viking women build a ship and set off across the sea to locate their missing menfolk. The sea monster only makes a cameo appearance."
Posted by Bob Wilkins: The Man Behind The Cigar at 7:15 PM 2 comments: